Libby, OverDrive’s new app for ebooks and  audiobooks, is a breeze to use on the whole. But it lacks all-text boldface and some other typographical amenities that many library users would appreciate.

You name your library, type in your library card number and go through a few other simple steps, once you’re past the opening screen. And bingo, that’s it.

Nice job! I’d appreciate a more text-oriented option for the times when I just want to find a book—not worry about the view along the way. But that aside, I really like the aesthetics and the general interface of this app for iOS and Android.

What’s more, if you hold cards from multiple libraries, you can easily scoot back and forth between institutions, and Libby even allow for different cardholders within the same family.

Also, Libby is a nice way to search for titles that you can then read in on a Kobo Aura One, made by OverDrive’s corporate cousin.

Unfortunately, however, like other cloud-based OverDrive apps, this one lacks full accessibility.

In the traditional OverDrive library app you could summon up boldface fonts, so useful to older library users as well as certain K-12 kids with special needs. But like at least one other cloud-based app from OverDrive, Libby lacks it. The screenshot below makes the type look sufficiently bold. Believe me, however, in real life, that will not be the case for me and millions of others with contrast-sensitivity issues. 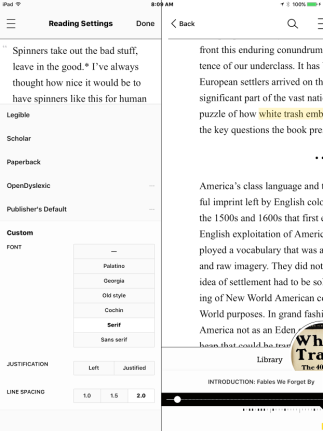 The omission of all-text bold is unacceptable. Supposedly libraries and other public organizations are to follow accessibility laws. Lack of boldface is clearly outside the spirit of these laws and perhaps even the letter. I asked OverDrive about the omission. A company spokesman promised to “share your comments with our team and let you know if we have anything new that we can announce!”

In fairness to OverDrive, the company does say that “Libby does not yet offer accessibility or multilingual features. If you require accessibility or would like to use an app in a language other than English, please use the OverDrive app instead of Libby for the time being.” Libby has not been officially released.

So maybe there’s hope for all-text bold in Libby before OverDrive locks up. But if bold is definitely on the way, OverDrive should have told me.

It took years of pleas from TeleRead and others, but Amazon finally gave us the all-bold option on recent E Ink Kindles, and OverDrive needs to be competitive even if Libby is an app rather than a dedicated reader.

Kobo E Ink readers have offered bold for eons—you can even adjust the font weight. What’s more, they let you smoothly change margins and line spacing without your having to live with presets. That’s another way Libby could catch up with Kobo. I’m only dreaming, but ideally someday Libby could even offer an advanced typographical setting screen that, feature for feature, matched Moon+ Reader Pro, probably the feature champ among ereading apps.

I have two other suggestions. I normally want to search only for ebooks and only among the titles available. Libby’s setting should make it easy for that configuration, or another, to be a personal default unless overridden. Also, while I appreciate Libby’s ability to let me take notes, I should be able to export them to a file or e-mail them. How about it, OverDrive? So many of your users are students. Why can’t you better help them save and organize the information they obtain from the books? Note-taking issues are among the major complaints that Luddites have against ebooks, and you’re in a position do something. In the future, for people who believe handwritten notes are best, you might even build that capability in via a stylus. Note-taking in ebooks could especially benefit as well from voice recognition, and at least, that is already available and should only get better.

Other strategic reasons for OverDrive to care about user needs

Compared to past years, OverDrive is no longer as influential in the International Digital Publishing Forum as before—IDPF looks about ready to finalize the merger with W3C despite the company’s objections. One way for OverDrive to help regain influence would be to respond nimbly to users’ demands and make librarians happy at the same time. Improving Libby wouldn’t hurt.

There is one other consideration out there. Libraries are experimenting with SimplyE, an app that works with ebooks from different vendors. I have not tried SimplyE yet. Most likely it is not as rich in features as OverDrive apps, but in time SimplyE might well evolve and surpass OverDrive apps—one more reason for OverDrive to care. In fact, if OverDrive is really smart, the company itself will develop an app that can work not only with its own ebook collections but also competitors’.

But back to Libby. Try it. What do you think?

Download information: iOS and Android. According to OverDrive, “At this time, Libby is only available for public libraries, so you won’t be able to use Libby with school, corporate, college, or law libraries.” Also, the current version “lacks multilingual features.”

33 thoughts on “Libby: New OverDrive library app is a snap to use but lacks amenities like all-text boldface”