(2019 Update: Pricing strategies for Simon & Schuster have changed — and so has Amazon’s interface, making deals on titles harder to find. Sigh. It was good while it lasted).

In July, I stumbled on an amazing fact. One of the biggest U.S. publishers, Simon and Schuster (S&S),  has been aggressively discounting its ebooks. Here is generally what I have noticed so far:

NOTE: The deals mentioned in this article apparently are generally only available to customers at the Amazon.com store . You can’t find them if you are surfing at amazon.uk, amazon.fr  or amazon.ca.

I’ve recently become aware that these same deals are available on Kobo (Here’s some help about how to browse through Kobo’s S&S inventory).

Something about Simon and Schuster’s Catalog

Amazon.com can be  hard  to browse through, so pay attention. If you just want to get the links to each category, I will give them at the end, but I want to explain how to get there first.

(UPDATE: Because of  the quirkiness of the Amazon.com site, you need to browse first to the desired category and later change the Sort by option. I am correcting the directions somewhat to prevent the category options from messing up on you).
Now you need to browse through the categories on left. First and most importantly,  click See more, 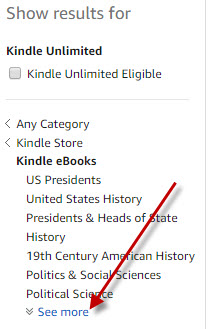 After you click that, you will suddenly  open a magic portal  and reveal all kinds of literary wonders. Even more amazing, when you click any one of these categories, more subcategories will appear. (Isn’t it ridiculous that  Amazon hasn’t figured out how to make it easier to browse through this stuff?)

I’ll let you do your own browsing, but here are some of the more interesting categories:

Some of these even have sub-sub categories. By the way, to go up a level,  simply click the more general category above the current one.

Change the Sort By Option

After you have found the correct category, you need to change the sort method.

By default, “Featured” is the sort method, which causes some pricey titles to appear on top. Once you choose Low to High as the sort order, it will generally remember  this preference throughout your session.  Choosing the 2×2 box (when it is selected, it will be colored orange, as you see above), allows you to browse through a large number of titles more easily.

Finally, On the Sort by dropdown on the top right (under “Orders”), select Sort by Price: Low to High. Also, there are icons to change the view from horizontal rows to the 2×2 box of squares.

After you do this, you will see a view of the lowest priced S&S  ebooks for that category.

You can browse through dozens — if not hundreds — of titles fairly quickly if you have configured everything correctly. Sometimes a category won’t contain many titles — maybe you will need to browse through a broader category to find interesting stuff. Sometimes, the public domain titles clutter the first page of search results, so you may have to advance to Page 2 or 3 of search results to find some good stuff.

When you are browsing through a gallery of ebook covers in the search results on the Amazon site, you will notice that the top and bottom rows  will often contain “normal priced” ebooks. For example, even though you are sorting by price from LOW to HIGH, the items on the top row will often have very expensive prices!

I’m guessing that publishers (and maybe even Simon & Schuster) are paying for the privilege to have preferential product placement  through Amazon Marketing Service. Or else, Amazon must have some algorithm to throw out premium goods whenever a consumer is browsing through search results.

The key thing is that when you are browsing through pages of search results,  you need to look to the second row at least in order to see if you are viewing a list of titles by price. 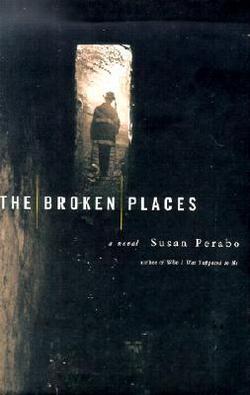 What if you find a title too late after the sale has ended? Or what if you want to be notified when another title by the same author has been discounted?

You can use a price alert system like ereaderiq to notify you when it goes to a lower price again. Ereaderiq is a free service which you need an account for. Also,  ereaderiq will show the price history for an ebook — giving you an idea about how often the price will be discounted. When the target price has been reached, ereaderiq will send you an email.

Let’s take an example. S&S publishes many titles by Susan Perabo (a great author).  At the moment, one title, Broken Places (which I read and highly recommend) is selling for 99 cents. All the rest are $10 and above.

Here is what the  ereaderiq page for this ebook looks like after you have set an alert for it: 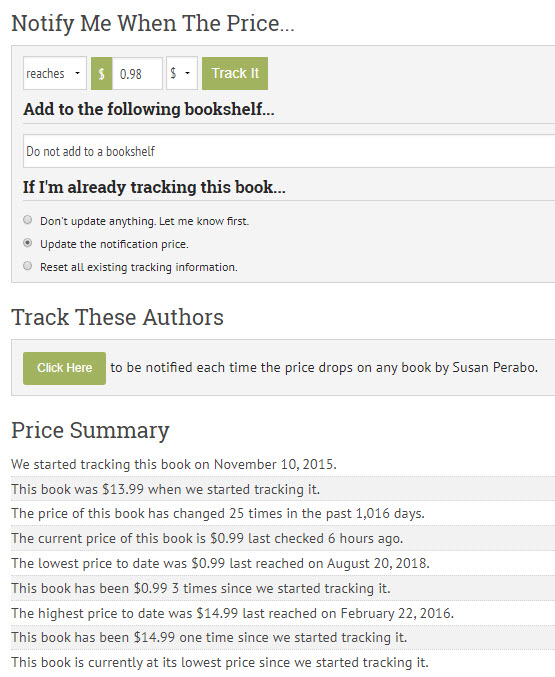 Ereaderiq also provides a price graph. You can set the scale of it — here’s what it looks like over a one year period. As we see, the ebook has been discounted to 99 cents for a one week period twice during the summer.

This price graph can give you an idea about how regularly this title is being discounted.

Pricing Trends for the Future

This is wonderful news that S&S is pricing their ebooks so aggressively. How long will they continue doing this? Who knows?

As an ebook publisher myself, I know you need to lower the price to draw attention to ebooks and perhaps attract reviews. It’s a way to pump up sales for older titles which a publisher doesn’t have  time or resources to promote.

Ever since I realized what Simon & Schuster was doing, I started doing global searches for other Big 5 publishers — Random House, Penguin, FSG, Knopf,  Harper Row. I haven’t really found that other publishers are doing cyclical sales. They are just leaving prices at 9-10  dollars and wishing for the best. Actually, it’s hard to do global searches by publisher  on Amazon. (I almost wonder if Random House or Knopf has been paying Amazon NOT to allow this sort of browsing to take place).

Actually the trend now is for publishers to coordinate  price drops with some of the ebook deal newsletters like EarlyBird Books, Bookbub, Booksy, Bookgorilla, Fussy Librarian, Ereader News Today, ereaderiq,  Bookperk and Bookriot.  What’s so strange/delightful about this S&S discounting is that they don’t seem to be promoting their sale prices at all (Update: Looks like they promoted 3 titles today on Bookgorilla).  Even S&S’s own ebook newsletter doesn’t mention these sales!

The problem  is that established book publishers are reluctant to cannibalize print sales with ultra-low ebook prices (That’s one reason that the To Kill a Mockingbird ebook sells and The Great Gatsby sells for 12.99 ).  They’d prefer that consumers not become too cozy with the 99 cent price point.

But what is the optimal price point? Also, is it better to give it an artificially high list price to discount later or leave it at a relatively stable price? How willing are consumers to tolerate the uncertainty of constantly changing prices on ebooks?

Finally, let me throw out a few 99 titles which look like great buys. Keep in mind that the price can change. But if they do, you can set a price drop alert on ereaderiq to be notified.  Update: Most titles in this section no longer are priced at 99 cents, but if sale prices are being rotated, you can assume that at some date the prices will go down again. Depending on when you read this piece, the price may have since changed to 99 cents.

Finally, I have some good news to report. According to one or two people, the Amazon sales are appearing in other ebook stores as well. Confirmed on Barnes and Noble so far.

Depending on the day you check, some of these titles will be on sale as well.

Update #1. Once again, it’s important to emphasize that these deals apply only to customers of the Amazon.com website. One or two commenters have noted that the sales are available on other ebook stores like iTunes, Google, Barnes and Noble. Still, it might only be for US customers.  Also, I’ve been experimenting with various methods to search for low-cost ebooks from other publishers.  That will probably go in a later post.

Update #2. I have learned from a well-informed source that it is possible to do non-standard searches on the Amazon site by manipulating the URL rather than trying to use the website’s search interface. This might expose some more “hidden” low prices. I’ll do some research into that and report back. Also, if you’re into ebook deal newsletters, you have many to choose from, but my fave is bookgorilla which offers a lot of interesting indie titles. Keep in mind that with most ebook deal newsletters, authors pay for a mention, but bookgorilla includes a lot more titles by indie authors without deep advertising budgets.

Update #3. I’ve noticed some changes in S&S’s pricing strategy.  The number of  99 cent titles has been curtailed (except in history and nonfiction perhaps).  After it’s been priced temporarily for for 99 cents, it returns to list price.  The next time it’s up for a sale, the price is 1.99 (most commonly), 2.99 or 3.99.  Some items, if they don’t sell well at all, are selling for 99 cents for two weeks or more. Also, Sometimes  ebooks are mistakenly priced at 99 cents. For example, when John Ralston Saul’s titles were on sale, I noticed that one of the titles was immediately repriced to a normal price after a day. My guess is that S&S wants to limit 99 cent sales to 1 title per author (and then vary the titles from week to week). This has happened several times, so it’s worth clicking on a list of other ebooks by that author.

Update #4 (Sept 2021). Most of the tricks described above no longer work. But S&S has their own ebook deal newsletter which lists some pretty good deals (mostly in the 1-3 dollar range).

7 thoughts on “How I cracked the code for Simon & Schuster’s ebook sales on Amazon.com”