The Fall of DELTA GREEN is one of the latest and most eagerly awaited iterations of one of the most beloved franchises in gaming and weird fiction. Actually, that’s two franchises. For newbies to this particular twisted neck of the dark woods, you have Sandy Petersen’s original Call of Cthulhu “roleplaying game of mystery and horror,” which helped propel H.P. Lovecraft’s Cthulhu Mythos to pop-cultural iconic status. Then you have Delta Green, the 1997 reboot of the original CoC for the X-Files era of spooky conspiracies, which at the time of writing occupies the RPGnet game index’s No 1 and 2 slots for the best RPG ever. Delta Green itself recently underwent a re-reboot into a more standalone RPG, courtesy of Arc Dream Publishing. Concurrent with this, Pelgrane Press, whose acclaimed Trail of Cthulhu rulesset adapted Lovecraftian horror to the GUMSHOE investigative RPG system, tag-teamed Arc Dream in the same Kickstarter to take the Delta Green franchise into hitherto uncharted territory – the Sixties.  The result is an RPG of investigative horror in the era of the Kennedy assassination, the Cuban Missile Crisis, and, of course, ‘Nam.

Kenneth Hite, author of The Fall of DELTA GREEN, has already scored multiple awards with the GUMSHOE system, from Trail of Cthulhu itself to the vampire thriller RPG Night’s Black Agents, and this rulebook is the logical culmination of all his work so far. The production values are superb, with scarce a spread of the PDF left unadorned with period pictures and juicy full-colour artwork. The text fleshes out the epoch, its events and timelines, and the backgrounds and skill sets needed for player-character operatives within it. The Fall of DELTA GREEN refines the GUMSHOE system to probably its most elegant and polished implementation to date, yet without going overboard into over-crunchy complexity – one area where I felt the seventh edition of Chaosium’s original Call of Cthulhu rules still fell down.  I love GUMSHOE for its emphasis on straightforward playability, and there The Fall of DELTA GREEN doesn’t disappoint – the actual game mechanics occupy only some 25 pages out of 374.

The bulk of the book is devoted to the world of DELTA GREEN itself, the eponymous US covert agency whose secret history is now RPG legend. Canonical Lovecraftian horrors and the corrosively insane Cthulhu Mythos are detailed with enough fidelity to satisfy any monster masher, but with enough original touches to restore fear and menace to the franchise. I haven’t done more than dip into Arc Dream’s new Delta Green: Handler’s Guide, but it looks like The Fall of DELTA GREEN goes it one better, as fans have remarked, in updating some of the key background material and cults in the original Delta Green canon, from The Fate of New York to the castration-obsessed Skoptsis. Hite makes the whole shebang hang together organically, in a topos of hubris to Nemesis for the decade that begins with Yuri Gagarin’s ascent into space, and ends with Charlie Manson’s Helter Skelter.

Criticisms? Well, any cavils about such a huge, exhaustive and superbly produced work are bound to be minor ones. Still, as a Brit, I would have liked to see coverage range further beyond the US and Southeast Asia. The book’s luscious world maps cover incidents and aberrations from Greenland to the Tasman Sea, yet the text takes in only a sprinkling of them. And the Sixties were the height of the Cold War worldwide, from Cuba to Prague, the era of Blow-Up and Funeral in Berlin as well as Bullitt and The Graduate, and home turf for 007 himself. Cold War paranoia and Delta Green nihilism are made for each other. I can understand why gamers would jump at the chance to play in ‘Nam. I can appreciate that the contemporary US military and intelligence apparat so exhaustively detailed in the rules’ character creation guide was crying out to be modelled. Yet I still would have loved more Berlin Station and less B-52 strikes.

Also, there’s no table of Sixties-era weaponry. Kenneth Hite has written very eloquently elsewhere about why he feels that these are no longer de rigeur “because with the advent of Wikipedia a big list of guns is just a mouse-click away,” but the Sixties is still a very different time, where period weapons are integral to the feel and flavour, yet where many younger gamers may be left groping. Where would a game of Cold War clandestine activities be without the Carl Gustav 9mm (the Swedish K) or the Makarov pistol? Yes, 374 pages is already a massive amount of material, but the core rules are crying out for an expansion or five, to flesh out all these skimped opportunities. The positive side of that is that, they’re so good that they demand more.

Those few points aside, we’re looking at another RPG classic. The tone of the game is perfectly suited to Delta Green and to horror gaming in general, loading the players with acronyms and whizzbangs without leaving them any less naked against the unknown. “Annihilation beckoned, in an apocalyptic guise that was nevertheless anatomised far more precisely than the visions of any medieval mystic,” wrote Charles Stross in his analysis of the Cold War, and “Cold War Spy fiction was in some respects the ultimate expression of horror fiction, for the nightmare was real.” The Fall of DELTA GREEN mirrors that mood perfectly. The feel is like some nightmare splice of X-Men: Days of Future Past with Quatermass and the Pit. As the Pelgrane blurb declares, it’s interoperable “with Night’s Black Agents, Trail of Cthulhu, and The Esoterrorists,” and is bound to be plundered for material and scenario ideas by devotees of many other gaming systems. Quite the grimmest, darkest RPG you’re ever likely to encounter, because its subject matter, historical and fantastical, dovetails so perfectly. A horribly compelling masterpiece. 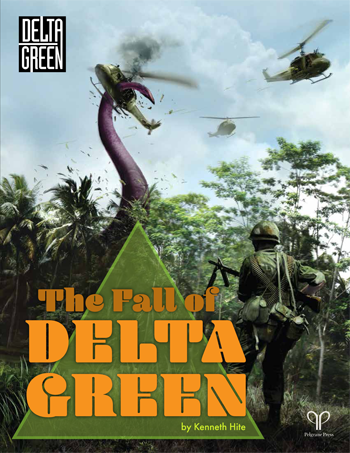 2 thoughts on “Review of The Fall of DELTA GREEN, by Kenneth Hite”