No, this isn’t going to happen everywhere in rural and small-town America if Donald Trump wins the presidency. But most likely we’ll see more of it, given his hostility to books and learning.

All three public library branches in Perry County in  Mississippi are shutting down. The county supervisors have decided not to fund their share of the budget for the Pine Forest Regional Library system, which also runs libraries in Greene and Stone Counties. The big reason given by Perry County supervisors for the closure? Cutbacks in in state and federal funding. The politicians likewise talk of “unfunded state and federal mandates.”

Wait. The plot thickens. TV station WDAM tells us that the supervisors “also said the regional library did not submit a budget request nor has it presented year-end financial statements or reports to the county in several years, even though it is required by law to do.” Charles Cox, director of Pine Forest, reportedly replied that “a request had been gone out to the supervisors. He also said the library system has been audited several times and those reports have been presented to the library Board of Trustees as required.” 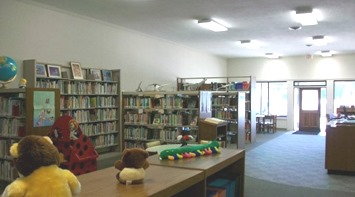 Were there financial irregularities? Who knows? But whatever’s going on, libraries obviously are not that high on Perry County’s list of priorities. Look at this photo showing the interior of the library in Richton in Perry County. Not exactly a library palace. While the supervisors have said that they may revisit the issue in the future, there’ll be no funding for the 2016-2017 fiscal year.

Now think nationally. Do you understand what a Trump win could mean to the Institute of Museum and Library Services,  which, with an annual budget of just $230 million, is pretty much underfunded anyway? Speaker of the House Paul Ryan has even called in the past for the end of IMLS. That could mean yet more damage to America’s rural systems.

“When you take away” libraries, WDAM quoted Cox, “it hurts a community.” People lose “an opportunity to have the ability, for example, to look for jobs, go online, take care of their taxes, get an education, find information that they need, even be entertained. It’s all taken away at one time.”

Once public libraries were unassailable. William F. Buckley, Jr., the conservative columnist, wrote two “On the Right” columns in favor of my TeleRead vision of a well-stocked national digital library, and were WFB alive today, he undoubtedly would do the same again. But not everyone feels that way about the value of public libraries, either digital or traditional. Boing Boing recently ran the following headline: Douglas County, OR using dirty ballot tricks to finish off the slow murder of its libraries. A few details:

For years, the Douglas County commissioners have reduced the budget of the county’s 11 libraries, serving 100,000 residents, and they’ve vowed to zero out its budget next year, so the library’s supporters got a ballot initiative to create a Special Library District that would keep the doors open — naturally, the county has removed all mention of the initiative from its website, using dirty tricks to finish off its dirty work.

You can read more from the Everylibrary advocacy group and an Oregon public radio station, as well as the News-Review newspaper in Roseburg, Oregon.

I know: taxpayers worry about household expenses and don’t want to pay an extra $100-$200 a year or whatever in property taxes for library service. But maybe more is at work in Mississippi, Oregon and elsewhere in rural and small-town America. Some readers of the News-Review have called for check-out fees, privatization and other measures, but perhaps this gem from a wingnut in Oregon really cuts to the chase even if it isn’t about the library controversy per se:

This letter is in response to the gentleman who thinks a college education, aka brainwashing, from far-left, socialist-leaning professors and liberal art degrees are the most important things anyone has going for them. He obviously has a degree in something and feels he is superior to we “deplorables” as Hillary called us, and with which I assume this gentleman is in agreement.

He is so right, however, in stating that our education system is failing us. They no longer teach about how and why our country came to be, how great it is, right from wrong, etc. They teach things like why Suzie has two mothers, how to use condoms and to be tolerant of everything, when those same teachers/professors are intolerant of everything they don’t believe in. Other countries have said that America will fall from within, and each day we come closer to their prediction.

Sorry, sir, but I would rather have citizens with common sense and who cling to their guns and Bibles on my side any day. With common sense and flexible minds we are able to rationally think things through and come to SENSIBLE conclusions without needing the liberal/socialist biases from today’s colleges.

To hell with free public libraries to prepare kids for college and better-paying jobs. Instead let’s “Make America great again.”

Image credits: Top image is of the Richton library branch in Perry County and is from Google Street View. Library interior shot is from Pine Forest site.