A well-known e-tailer decides to reach out directly to consumers by opening outlet stores in malls. No, not Amazon–in this case, it’s popular toy and novelty store ThinkGeek. They opened an outlet in the mall in the southern Indianapolis suburb of Greenwood this weekend, and will be opening another in the northern suburb of Castleton next weekend. And I stopped by to check it out. 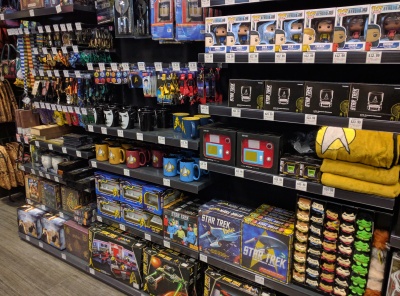 ThinkGeek doesn’t have a whole lot to do with ebooks. We’ve only mentioned it once or twice in passing, for largely-unrelated matters. But the move to open retail stores (16 so far, according to Marketing Coordinator Andy Chilton) seems to be part of the same trend as Amazon’s Amazon Books bookstores, and has some interesting implications for chain bookstore Barnes & Noble.

If you’re not familiar with ThinkGeek, the 17-year-old e-tailer has been described as “a sort of Sharper Image for sysadmins.” It specializes in carrying toys and novelties that appeal specifically to self-identified “geeks”–computer professionals, pop-culture fans, and others with similar interests. It was acquired by Slashdot and Sourceforge parent VA Linux shortly after it was founded, and remained under their ownership until mid-2015, when it was bought by computer game retailer GameStop. 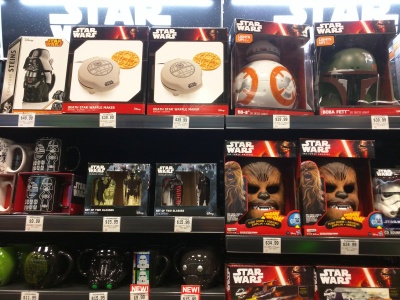 When I asked Marketing Coordinator Andy Chilton why ThinkGeek was opening retail stores now, he explained that ThinkGeek often heard from customers who wanted to be able to examine in person some of the merchandise they offered. When the company was bought by GameStop last year, they saw it as a natural opportunity to take advantage of GameStop’s expertise in the bricks-and-mortar retail business to launch a chain of ThinkGeek outlets.

The Greenwood store is the size of a usual mall boutique shop, a bit small but full to the brim of geeky merchandise. (Chilton told me that the Castleton store will be 500 square feet larger, being located in space that used to be a TGI Friday’s.) There are big sections of walls devoted to geeky mainstays Star Trek, Star Wars, Doctor Who, Marvel comics, and others. There are plenty of helpful staff on hand ready to answer any questions customers might have. And it is interesting to be able to see in person some of the products I’ve heretofore only read about, such as the Starship Enterprise pizza cutter. 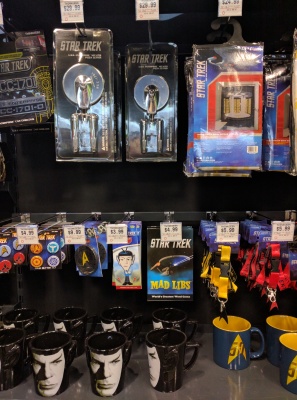 The really interesting thing about this, though, is that it represents a reversal of the usual state of things. It used to be that established brick-and-mortar stores saw opportunities online and migrated there, with greater or lesser success. But first Amazon and now ThinkGeek represent the exact opposite: businesses that made a name for themselves as e-tailers and then decided to poke their noses into the real world. They even did so for fundamentally similar reasons–to give shoppers a place to examine in person wares that had previously only been sold online. If they can be successful in their respective niches, what other e-tailers might show up in your friendly neighborhood mall next?

Furthermore, if ThinkGeek succeeds in these stores and thus expands its operations wider, it could pose a threat to already-beleaguered Barnes & Noble. With book sales declining, B&N has been trying to reinvent itself with boutique toy store and game sections–but much of the merchandise ThinkGeek offers overlaps with the stuff Barnes & Noble does. For example, I got one of my Doctor Who Sonic Screwdriver toys in the Barnes & Noble located at the other end of that very same mall…but guess what ThinkGeek has hanging on its walls?

As a boutique store with only 16 locations, ThinkGeek probably isn’t much of a threat to the toy side of Barnes & Noble or anybody else at this point–but then, Amazon Books only has two locations right now, and it’s nonetheless got everyone worried about how its competition could affect B&N and other bookstores on the book side. 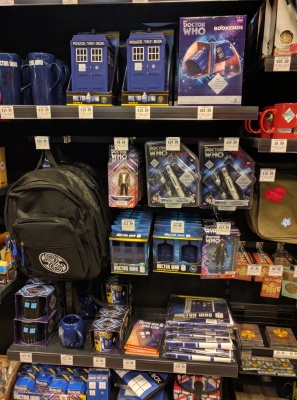 ThinkGeek is one of the Internet’s biggest original name brands, known for clever and inventive stunts like making April Fool’s Day jokes into actual products, or producing a cover of The Who’s “Baba O’Riley” using only gadgets available in its catalog. Barnes & Noble, these days, seems to be known largely for its failings–the Nook’s long, slow decline (to the point where the B&N college division’s stores don’t even carry it anymore), or its inability to keep a CEO for longer than a year or so.

It’s strange, isn’t it, the idea that a company that made its name in bricks and mortar over a period of decades could potentially be upstaged by an Internet upstart? (Or, rather, an Internet upstart that’s not Amazon, since Amazon upstaging B&N is old news by now.) Regardless of whether it’s actually likely to happen, it’s still remarkable that it’s credible that it could. Which in turn leads one to wonder exactly how Barnes & Noble can be doing so badly at what used to be its core business.

That said, not everyone feels ThinkGeek’s foray into physical retail will necessarily be successful. “Geeking in Indiana” blogger Anthony Troxell points out that similar stores have been tried and failed, and that ThinkGeek could face stiff competition from other stores including Hot Topic, HobbyTown USA, or even “itself” in the form of GameStop’s own locations. (And, though he doesn’t mention it, Barnes & Noble–after all, if ThinkGeek’s similar selection could be seen as a threat to B&N, it can also work the other way around.) Hence, it remains to be seen how successful ThinkGeek will actually be as time goes by. There were a lot of people there for the grand opening when I visited, but that may not translate into enough customers to stay in business in the long run.

In any event, hopefully Barnes & Noble will get its act together somehow. Meanwhile, what do you suppose the next Internet brand to open stores in the real world might be? Is there some other brand that could benefit from being able to its examine products in person? Ironically, ebooks don’t suffer from that particular problem, since they would look exactly the same in person as they do online–but their physical equivalents do, and that’s a big part of the problem the publishing industry is facing as Barnes & Noble struggles.